The Ottoman Empire comprised much of South-Eastern Europe, Northern Africa and Western Asia between the 14th century and the early 20th century. In Ottoman Turkish, its name was Devlet-i ʿAlīye-i ʿOsmānīye which means The Sublime Ottoman Empire.

For six centuries, the Ottoman Empire was the focal point for interactions between the Eastern and the Western worlds.

Even though the dynasty was of Turkic origin, the Ottoman Empire was strongly influenced by Persian culture and customs. 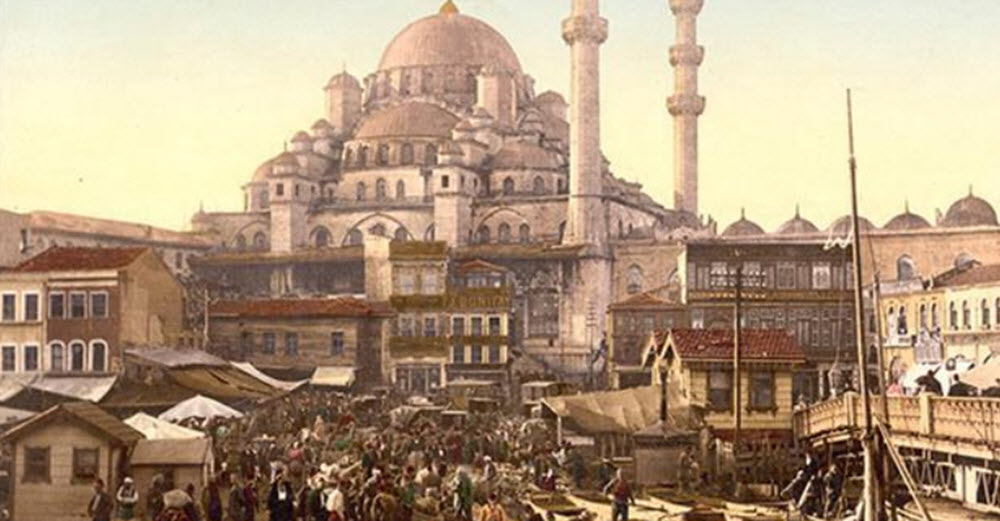 Which was the capital of the Ottoman Empire?

Ottoman Turkish was the official language of the Ottoman Empire. It was used for all things official, and was also the spoken everyday language of a majority of the people in Anatolia. Also, a lot of the muslims living in the Balkans spoke Ottoman Turkish.

Persian was taught in state schools in the Ottoman Empire and was an important language for litterature, poetry, historical texts and diplomacy.

Arabic was spoken mainly in Arabia, North Africa, Mesopotamia and the Levant.

During the late empire, tt was common for educated members of the Ottoman Empire to know French.

The state religion was Sunni Islam, but other religions were allowed.

How large was the Ottoman Empire?

During the reign of Suleiman the Magnificient (r. 1520-1566), the Ottoman Empire reached a population size of 25 million.

In 1912, two years before the start of the devastating World War I, roughly 24 million people lived in the Ottoman Empire.

The origins of what would become the Ottoman Empire lies in the town Söğüt, where the Turkoman tribal leader Osman I founded his state at the end of the 13th century.

After 1354 the Ottman Empire expanded into Europe. They conquered the Balkans and became a transcontinental empire, with land in both Asia and Europe.

The Byzantine Empire, which had lasted for a millennium, ended when the Ottoman Empire conqured its capital Constantinople in 1453.

The Ottoman Empire reached the peak of its power under the reign of Suleiman I, also known as Suleiman the Magnificient, who ruled the Empire from 1520 until his death in 1566.

Under Suleiman´s reign, at least 25 million people inhabited the Empire, and it included parts of:

The Ottoman Empire remained strong and financially prosperous even after the death of Suleiman I, and was a strong military power through the 17th and much of the 18th century. The long period of peace that occurred from 1740 to 1768 did however cause the Empire´s military system to stagnate, and when the peaceful period came to an end, the Ottoman military proved ill-equipped to deal with the more modern armed forces kept by the Habsburgs and Imperial Russia. After a series of defeats, the Tanzimat – a comprehensive reformation program – was launched by the Ottoman ruler to bring the Empire up to date.

The Empire lost significant amounts of territory in the Balkans during the 19th century, but the period is still seen as a beneficial one, as the Tanzimat yielded a stronger and more well-organized Empire.

At the onset of World War I, the Ottoman Empire formed a war alliance with Imperial Germany and Italy. On 29 October, 1914, the Ottomans carried out a surprise attack on Russia´s Black Sea coast, which prompted the Russian-French-British alliance to declare war on the Ottoman Empire.

The Ottoman Empire could largely hold its own against the opposing alliance, and had several important victories in the early years of the war, including the Battle of Gallipoli and the Siege of Kut. Discontent was brewing internally however, and this eventually became very difficult for the Empire to handle combined with a war. Within the Empire, the imperial forces carried out genocide against both Armenians, Assyrians and Greeks.

Backed by the British, Arab forces within the Empire started the Arab Revolt in 1916. The goal of the revolt was to establish a single large unified and independent Arab state, something which the British had promised to support. The British-backed Arabian Sharifian Army successfully expelled the Ottoman military from much of the Hejaz and Transjordan, before taking Damascus and establishing a short-lived monarchy.

After the end of WWI

As the Ottoman-German-Italian alliance lost World War I, the defeated Ottoman Empire was occupied by the Allied Powers. The British refused to keep their promise to the Arabs, and land in the Middle East was instead partioned into mandate territories by the British and French.

Formation of the Republic of Turkey

Mustafa Kemal led a successful Turkish War of Independence against the occupying Allied Powers, and the Turkish independence movement resulted in the establishment of the Republic of Turkey in the Anatolian heartland and the abolishing of the Ottoman sultanate and caliphate.