Ancient Carthage was a Phoenician city-state located in present-day Tunisia, along the coast of northern Africa.

Carthage was founded as a colony of Tyre by Phoenician settlers around the year 814 BC and became independent from Tyre in the mid-seventh century BC. The Carthagian Empire, which grew out of Carthage, dominated the western Mediterranean region for centuries. Despite turning into a cosmopolitan city, Carthage remained, to a great extent, culturally and linguistically Phoenician (Punic).

The Charthage state was embroilled in three major wars with the Roman Republic, and in146 BC, Carthage was utterly destroyed by Roman forces. This marked the end of the Carthagian state, as the region fell under Roman control.

Much of what we know, or think we know, bout Ancient Carthage and the Carthagian Empire comes from texts written by Roman and Greek authors, because of the widespread destruction of Carthagian texts after 146 BC. So, it is essentially texts written by the enemy and they need to be evaluated with a critical eye. Also, many of the texts were written long after the destruction of Carthage by the Roman Republic. 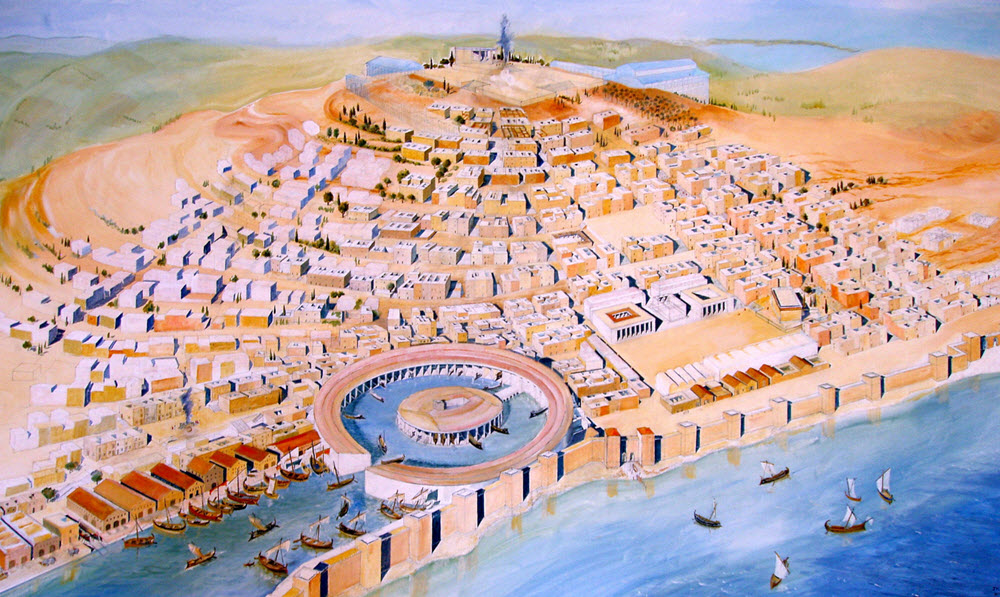 Why is it called Carthage?

The Punich (Phoenician) name for the city was Qart-ḥadašt, which means New City. In Latin, this became Carthāgō. Carthage is the English version of the name Carthago.

Carthage was a monarchy until circa 480 BC, when it became a republic led by Shophets.

From colony to empire

Carthage was founded around the year 814 BC as a colony of Tyre, one of the earliest Phoenician metropolises.

Carthage gained independence from Tyre during the mid 7th century BC, and embarked on a gradual expansion across north-western Africa, the Iberian penninsula and several notable islands in the Western Mediterranean.

The Carthage Empire was a complex web of colonies, client states and allies. It also drew power and resources from being the focal point of a vaste trade network that extended from sub-Saharan Africa to northern Europe, and from West Africa to the Levant. Trade routes were protected by the Carthagian navy, which for centuries was both the largest and strongest in the region.

The Empire attained its heigh of power in the third century BC, when Carthage was one of the richest cities of the ancient world. During this era, the city-state Charthage was the dominant military, political and economic power in the Mediterranean, and constituted a major centre for commercial and industrial activities in the region, including the trade of metals, agricultural goods and manufactured products. In 221 BC, somewhere between 3.7 million and 4.3 million people lived in the Empire.

Carthage was embroiled in conflicts with several of its neighboors, including the Greeks of Sicily and the Berbers of North Africa. A series of power struggles with the Roman Republic eventually led to the Punic Wars of 264-146 BC. In 146 BC, the Romans destroyed the city Carthage. By the firrst century, all former Carthagian dependencies, plus a number of Phoenician city-states, was under Roman control.

Where the city of Carthage had stood, the Roman Republic founded a new city: Roman Carthage. This city eventually became one of the most important cities in the Roman Empire´s province of Africa.

The main languages in Carthage was Punic, Phoenician, Berber (Numidian), and Ancient Greek.

The Punic religion practiced in Carthage had its roots in the Phoenician version of the anceint Canaanite religion.

During the period when Carthage was a highly cosmopolitan place (circa 550-300 BC), divinities from neighbooring belief systems were also worshipped in Carthage, including Greek, Roman, Egyptian and Etruscan gods and godessess.