Imperial Germany – also known as the German Empire, the Imperial State of Germany or the Second Reich – was a German state that existed from the unification of Germany in 1871 to the abdication of Emperor Wilhelm II in 1918. In German, it was known as Deutches Reich or Deutches Kaiserreich.

Imperial Germany consisted of 26 member states. Four were kingdoms, six grand duchies, five duchies (six until 1876), seven principalities, three free Hanseatic cities, and one imperial territory. The kingdom of Prussia dominated Imperial Germany, as it was home to two-thirds of the Empire´s population and territory, and had been given certain privileges by the imperial constitution.

Imperial Germany existed for less than half a decade, but during this time rose up to be an industrial, technical and scientific powerhouse whose achievements had a strong impact far and wide. Between 1901 and 1918, seventeen Nobel Prizes in scientific subjects went to Germans, plus three Nobel prizes in literature.

On the brink of World War I, Germany was the largest economy in Continental Europe, and the fourth largest in the world surpassed only by China, the United States and the British Empire. 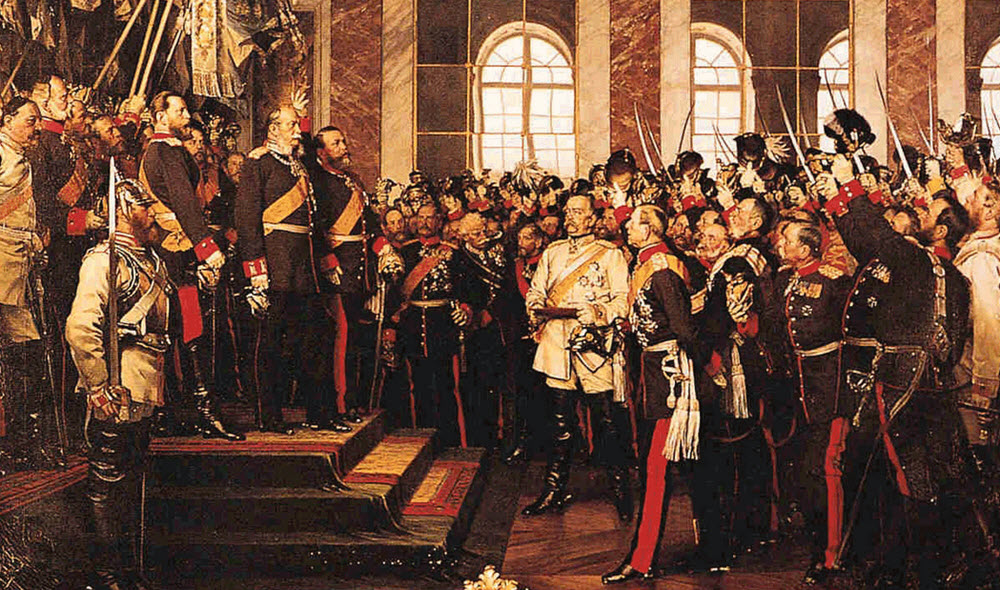 How large was the population?

Christianity was the majority religion in Imperial Germany.

At the 1880 census, over 62% of the respondents were United Protestant (Lutheran, Reformed) and over 35% were Roman Catholic. Only 0.17% reported their religion as Other Christian.

The largest minority religion was Jewish, at 1.24%.

Only 0.07% reported something else than Christian or Jewish.

The creation of Imperial Germany

Imperial Germany was established on 1 January 1871 when all the south German states except Austria joined the North German Confederation. This was the date when a new constitution came into force for the new imperial state, effectively creating the German Empire and introducing the title of German Emperor for Wilhelm I, King of Prussia from the House of Hohenzollern. Otto von Bismarck, the Minister-President of Prussia, became Chanchellor of the new empire.

Otto von Bismarck was the Chancellor of Imperial Germany from 1871 to 1890. He went from being rather liberal for much of the 1870s to taking on a more conservative stance from 1878 and onward.

It was during Bismarck’s time as Chancellor that Germany colonized parts of Africa, despite Bismarck’s peronal opposition to the project. Quickly, the expanding Imperial Germany built an colonial empire that, at the time, was surpassed in size only by the British and the French.

Back home in Europe, Imperial Germany could enjoy a fast-growing industrial sector and made major investments in the development of the railway network. It had one of the world´s strongest armies, and in less than a decade its navy went from relative obscurity to being second only to Britain´s.

The Dual Alliance between Imperial Germany and Austria-Hungary was consolidated in 1879, with Italy being added to the Alliance three years later. During this era, Imperial Germany also had strong diplomatic ties with the Ottoman Empire.

Weltpolitik (“world politics”) was an imperialist foreign policy adopted by Imperial German once Bismarck had been removed from his post as Chancellor in 1890. Its goal was to turn Germany into a global power, and it marked a sharp contrast from Bismarck’s promotion of defensive Realpolitik.

Tension between the European powers came to a new peak during the summer of 1914. The Astro-Hungarian heir was assassinated by a Bosnian Serb Ygoslav nationalist. Serbia´s response to the murder failed to appease Astria-Hungary, and by July, the great powers of Europe had divided themselves into two coalitions, with Austria-Hungary forming a Triple Alliance with Germany and Italy, while France, Russia and Britain made up the Triple Entente.

Imperial Germany initially expected to quickly conquer Paris in the fall of 1914, but failed, and the war on the Western Front entered into a drawn-out stage where no side gained or lost much territory for a prolonged period of time. Imperial Germany was more successful on the Eastern Front, where it grabbed a significant amount of land from Imperial Russia.

In 1917, Imperial Germany announced the start of unrestricted submarine warfare, a declation which helped to bring the United States into the war.

After Imperial Germany´s failed offensive in spring 1918, the Empire was very weak and struggling to continue the war effort. By October, its armies were retreating, and its allied Austria-Hungary and the Ottoman Empire had already collapsed.

The end of Imperial Germany

In November 1918, the Novemberrevolution resulted in the abolishment of the federal constitutional monarchy and the abdication of Emperor Wilhelm II. Imperial Germany was replaced by a parliamentary republic – the one we know as the Weimar Republic. The Weimar Constitution was adopted in August 1919.